Here you can find all the latest news from Flims Laax Falera.

All the news from Flims Laax Falera directly in your mailbox? Subscribe to our newsletter now!

Next weekend you will have a good choice of slopes around the Crap Sogn Gion. In addition to the existing offer, the Laax valley run will be opened.  In addition, the Flims Laax Falera Shuttle operates every half hour on weekends and even quarter-hourly during peak times, so that guests from Flims can also reach Laax-Murschetg flexibly. Due to the predicted snowfall and the strong wind in the higher elevations, operation on the Vorab glacier is unlikely to commence. Due to the construction site of the Stenna Centre, the 500 parking spaces at the Flims base station will not be available until mid-December 2017. The service from the Flims base station will therefore commence on 16 December 2017.

Restaurants in the valley open daily:

Next weekend you will have a good choice of slopes around the Crap Sogn Gion.

If weather and snow permits, the following lifts, slopes and restaurants are open on the coming weekend:

Next weekend you will have a good choice of slopes around the Crap Sogn Gion. Thanks to the snowfall, the offer can even be extended compared to last weekend. Newly added are slope 51, the extension of slope 52 to Curnius, the chairlift from Falera and some restaurants. Operation starts in Laax-Murschetg from 08.30 am. In addition, LAAX will definitely start daily operations from Monday, 27 November 2017 from the Laax-Murschtg station, starting at 8.30 am.

Information about the open lifts, slopes and restaurants for the coming weekend are as follows:

Information on open lifts, slopes and restaurants from Monday 27 November 2017:

On 18 November, the world's best ski resorts were selected at the "World Ski Awards" in Kitzbühel. The event is part of the World Travel Awards, also known as "Oscars of the travel industry". LAAX has already won several awards. This year we are once again one of the winners and can look forward to three awards: as the world's best freestyle resort, as the best ski resort in Switzerland and with rocksresort as the most environmentally friendly hotel. We are very proud to receive such great feedback from both the jury and our guests,"said Flavio Battaini, COO of the White Arena Group. "The awards show us that we are meeting the nerve of the times. We, as a whole team, are working on developing LAAX further and making it possible for winter sports enthusiasts to enjoy a unique experience in the future as well. The awards encourage us to remain innovative and give our best to make LAAX guests happy. The awards have been presented annually since 2013 by audience and jury decisions.

New category: "World's Best Green Ski Hotel"
For the first time, selected hotels were also chosen for the "World's Best Green Ski Hotel". The inclusion of this category underlines the increasing relevance of sustainability in the tourism industry. The rocksresort in LAAX, which cultivates a responsible use of its resources and the environment and acts according to the "Minergie" standards, took first place in this category.

Inside LAAX App wins gold twice
A few days before the "World Ski Awards", the in-house developed app "Inside LAAX" also received two awards. At the "Best of Swiss App" Awards it won gold in the categories "Design" and "Business". The app also made it onto the shortlist of seven candidates for the Master's degree. A total of 138 projects were submitted.

Winter is here in LAAX! It snows and the temperatures are also ideal for preparing perfect slopes. For this reason, further railways and slopes will be put into operation on the mountain next weekend, from 18 to 19 November 2017. There is a good choice of slopes around the Crap Sogn Gion and, if weather condistions permit, on the Vorab glacier. Operation starts in Laax Murschetg from 08.00 am. Furthermore, it is certain that LAAX will start daily operations on 25 November 2017, one week ahead of schedule. Next weekend the new GALAAXY will welcome you for the first time in a soft-opening phase and will present you with a small offer, while the last galactic works will be completed.

We open the following lifts and slopes:

The time has come - this coming Saturday, the 4th of November 2017, we will start the pre-season operation. On the Vorab the guests can expect a small slope and park offer under dreamlike conditions. The first ride from the valley station Laax is at 8 am. From 10.30 am, hikers and bikers will also be transported to the mountain, so that all guests can enjoy the snow sports on the Vorab glacier, hiking trails and the Neverend Bike Trail.
Due to strong winds and snowfall, the glacier remains closed on Sunday, 5th of November.

Open restaurants on the mountain and at the valley station Laax:

Open shops at the base stations Laax and Flims:

For the fourth year in a row the winter destination LAAX has been nominated as “Switzerland’s Best Ski Resort.” Although LAAX is competing against several world class ski resorts such as Davos Klosters, St. Moritz and Zermatt, the aim is to showcase its modern, dynamic and freestyle oriented concept.

Also this year, LAAX has been nominated for the newly created award of the “World’s Best Freestyle Resort.” Despite it being the first year that this distinction has been up for grabs, it’s already being viewed as one of the most important awards in the freestyle business worldwide. For more than two decades, LAAX has lived the Freestyle Lifestyle with passion and expertise. It boasts the world’s longest halfpipe, the olympic sized Pro-kicker-line, four freestyle snow parks, as well as the Freestyle Academy, Europe’s first freestyle indoor base. LAAX not only contains a wide variety of freestyle offerings, it’s also home to the LAAX OPEN, an internationally renowned worldclass freestyle event.

The award is part of the World Travel Awards, more commonly known as the “Oscars of the travel business” and the winner is decided by both jury and audience input.

The Voting of the World Ski Award is open until the 23 rd of September 2016.You can vote at the following links. 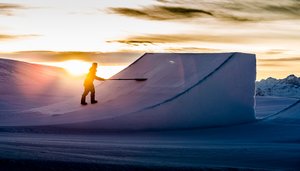 The skiing region of LAAX has once again triumphed at the World’s Best Ski Awards in Kitzbühel. LAAX took first place in the ‘World’s Best Freestyle Resort’ category, defeating renowned international rivals such as Whistler Blackcomb, Mammoth Mountain, Breckenridge and Mayerhofen. LAAX has already secured the award for ‘Switzerland’s Best Ski Resort’ for the fourth year in succession.

The prestigious World’s Best Ski Awards were presented in Kitzbühel on Saturday, 19 November 2016. The World Ski Awards are part of the World Travel Awards, also known as the ‘Oscars of the travel industry’. The World Ski Awards are based both on a public and jury vote. The awards have been in existence since 2013. This year, the World’s Best Freestyle Resort was crowned for the first time. The addition of the Freestyle category highlights how freestyle skiing and snowboarding has gained in significance.

Take your first turns on blue slopes or test your stamina on up to 13 kilometres of spectacular downhill runs.

Discover the new generation of INSIDE LAAX - your companion in the destination Flims Laax Falera.

We'll take you up there