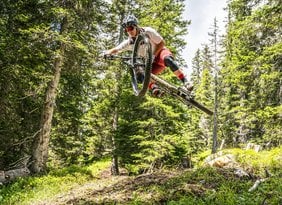 Railway operation
The chairlift Flims - Foppa and also the chairlift Foppa - Naraus, are in daily operation. Mountain bikers are transported to Naraus and the Runca Trail is completely open and passable.

Nagens Shuttle
From this weekend, 12 - 13 June 2021 and until the start of the main season on Saturday, 26 June 2021, the Nagens Shuttle will operate on Saturdays and Sundays to Alp Nagens, including bike transport. The regular timetable applies.